Roberto Giannini is one of the generation of artisans who started young in the workshop. He was 16 and at the time, for a teenager to work in leather, it was considered a prestigious trade, not too tiring and at night when he went off to dance he didn’t feel the fatigue of a heavy day’s labour or have grease under his nails. Ha lived the most prolific period for Florentine craftsmanship. During the ’80s when the Italian economy was growing and when big names were in the spotlight, he worked for well-known clients such as Bruno Magli and Paolo Gucci, Giorgio Armani and Valentino Garavani, exporting to Japan and the United States. 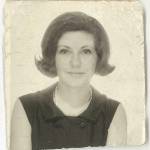 Then in 2001 the 11th of September occurred, and his golden world, like that of many other artisans, collapsed together with the Twin Towers. At an extremely difficult time in which the business risked going adrift, Roberto had all the support and affection from the whole of his family. His wife Mara, started in the administration, making huge sacrifices trying to put the books right. Leonardo the older son had never been much interested in his father’s profession and up until then had reluctantly applied himself, preferring to play footbal and having a good time. But in the time of need he started to give body and soul and to fight like a lion so that what his parents had created over the years would neither go too ruin nor degenerate by making decisions that might have speeded up their recovery.

Getting back to normal has been slow and hard, as they have transformed their work but not in the way they perform. In their laboratory in via Bartolini, Roberto was there behind his large wooden work table every day, his thumb dirty with glue in the midst of big rolls of leather, wallets, bags, belts and accessories, but above all leather plates, which are in pride of place in the best restaurants and hotels in Florence and in the rest of Italy, an item that in the last few years is new to their production. With sadness he spoke of the past, but he was content in being a true artisan in his workshop and in having kept up his family business; happy to have taught his sons the importance of the handmade article, a unique piece with its imperfections, the most attractive element.

Today Leonardo has taken over, with the help of his brother Tommaso and Susy – who has always been there – at the sewing machine. With long blonde hair, Leonardo looks like an American rockstar, a slightly melanchonic look in his eyes, burdened with the scars from the difficult times and the immense pain caused by the recent loss of their parents Mara and Roberto, but also a lot of gratitude.

This text  is taken from the book “Artisans in Florence” by Francesca Tofanari. Photos by Nicoletta Paparella